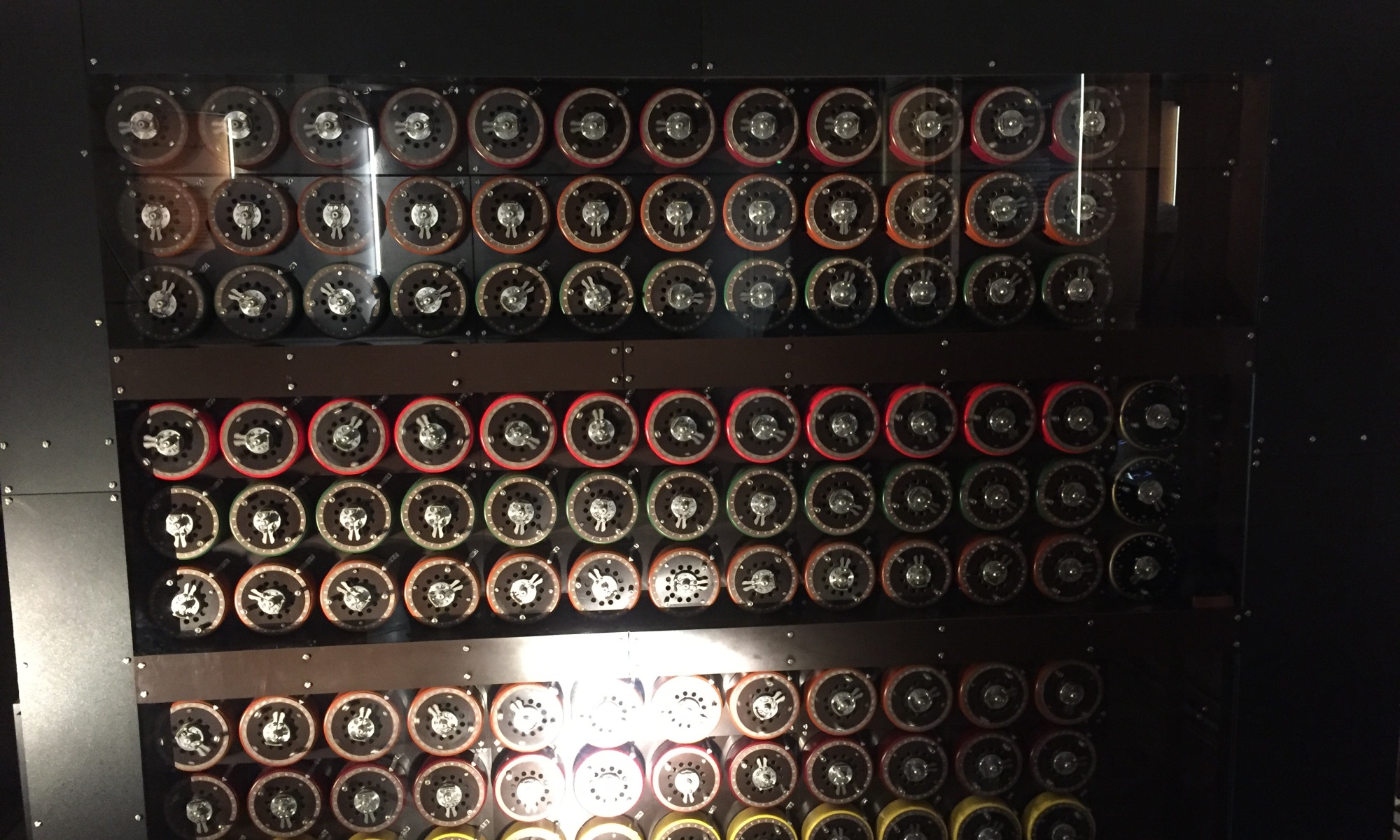 The British government code and cipher school was housed here with it’s main objective being to intercept axis forces communications with priority given to Enigma and Lorenz ciphers. 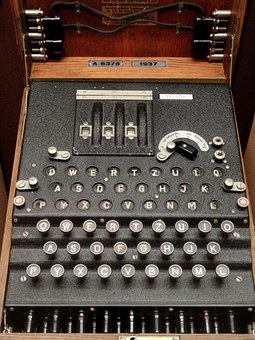 Alastair Denniston commander of operations for GC&CS 1919  –  1942 was told by Winston Churchill to leave no stone un-turned in recruiting the best minds in Britain.  With this in mind he firstly turned to the universities of Cambridge and Oxford, then in 1941 he had the Daily Telegraph run a crossword competition, those that completed the crossword where then discretely approached and asked about entering the war effort.

The main body of personnel where made up of mathematicians, physicists, engineers, crypt-analysts, linguistic, later thinkers, chess champions.

Some of the main personnel at Bletchley Park were, Alan Turing, Gordon Welchman, Hugh Alexander and Stuart Milner-Barry and many more.  They were all top people in their respective fields.

By the end of 1945 there was 10,000 personnel working at Bletchley and its sub stations.  75% of these were female, of middle class backgrounds, all held a degree in one field or another, civilian and uniformed personnel all worked a long aide each other.

After their initial basic training they all under went special training at the “Special Intelligence School” which was set by John Tiltman and located at RAF Buckingham and later Bedford.  The locals used to call this place the “Spy School”.

Some of  Bletchley achievements

Bletchley personnel achieved success on land, sea and air campaigns and shortened the war by at least two years,

Jane Fawett  –  credited for the decoding of a message that led to the sinking of the battleship “Bismark”.

Joan Joslin  –  work led to the sinking of the “Schamhorst”.

Dilly Knox  –  cracked the code of the commercial enigma machines.

Within British intelligence the highest classification during WWII was “Most Secret”, Bletchley and the work done there was even higher than that.

All personnel had to sign the official secrets act, however, some of the security warnings went even further, “DO NOT”, talk in billits, by your own fireside, talk at meals, talk in transit, in other words “NO TALKING”!! anytime anywhere, to anyone, not even those you work with.

There was breaches in security though with the most serious one been that of John Cairncross, a soviet mole/spy who infiltrated Bletchley, he was a member of the Cambridge spy ring.  He was sending intelligence and material back to Moscow.

The Soviet Union were never officially told about Bletchley and its activities due to the fact that Churchill never really trusted them, even though we were fighting on the same side.

In contrast, after America joined the war the co-operation between the US and British intelligence was cemented by a number of American cryptographers  joining the team.

There was only ever one axis forces attack on Bletchley, November 20 – 21st 1040, bombs reportedly ment for Bletchley railway station fell within the Bletchley estate.  Hut 4 was hit and so much so it shifted off it’s foundation by two feet (2ft).  The interesting thing is though, they winched it back onto it’s foundation whilst the personnel continued to work, no health and safety back then hey!! eeek….no thats trust!

So the drive down took two hours, pleased I wasn’t driving… thanks son..

There is a guy at the gate, he may or may not stop you, the vehicle in front of us was stopped, I hope the gate guy was embracing his position and asking for your clearance to enter!!! we didn’t find out, but it would be kind of cool hey..

admission fee Adult £18.50,    Souvenir Guidebook £6.00, once you have bought your ticket you can use it for one year to return as many times as you like for free.

Once through the payment area, you have to follow a certain path in which you have a couple of projectors giving you some WWII background.  There is also some interactive tables here, well worth having a go on… by the way, watch out for these throughout, they are everywhere and a most..

also in this area you will find some glass cabinets full of authentic books, as I looked at these I couldn’t help but imagine these on someones desk or constantly in their hand..

it’s worth looking out for these on the walls too, they have some great information on them…see below 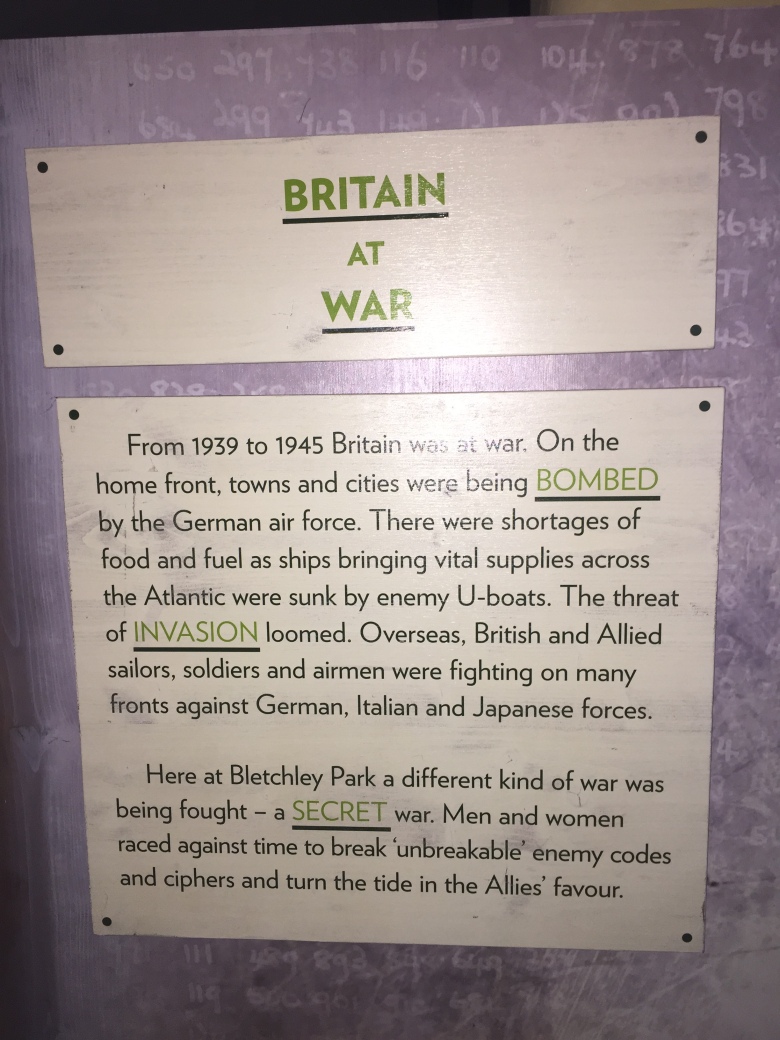 as your leaving this first hall you can’t help but notice this war time motorcycle, shown below

just before you leave this area to enter the park you can pick up a free handheld audio guide, just remember to return prior to leaving…

Onto block 8, down some stairs into the exhibits, there is everything in here, as I had firstly written about the Lorenz and Enigma machines in the first part of this blog, here is where you find out all about them…hope you like reading folks…. I found this fascinating, 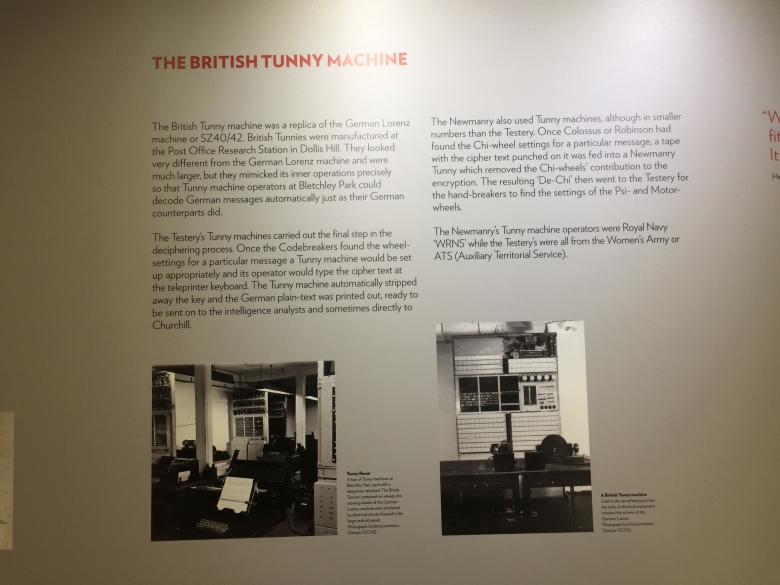 more picture from here in the photo gallery folk’s

on to hut 3, this hut has be be one the best we all thought, from the point of view of authenticity, the could see and spell its age.  It was the most important hut in the park.

Next huts 11 and 11a,  hut 11 has 4 mock up Bombe machines, its quite cold in there too, but with four of those machines in this small hut I bet it was loud…

Hut 11a shows how there work impacted some parts of the war and again has many interactive things to do,

there are many interactive exhibits in this hut

We next walked up to the garage area, there are 4 exhibits here, 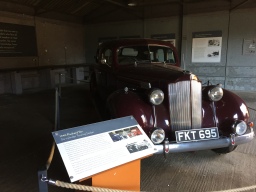 On to the main mansion now and wow what a building, the interior alone is breathtaking not forgetting of course the important part it played in park, but its ceilings alone are some of the nicest I have seen.

enter through the main door, the very same door that Churchill and all the top people had used, following in the footsteps of these soldiers, civilians and politicians felt unbelievable.

The large windows to the left is the office of the park commander,  office shown below

We moved onto the library which was used some subsections, please read below 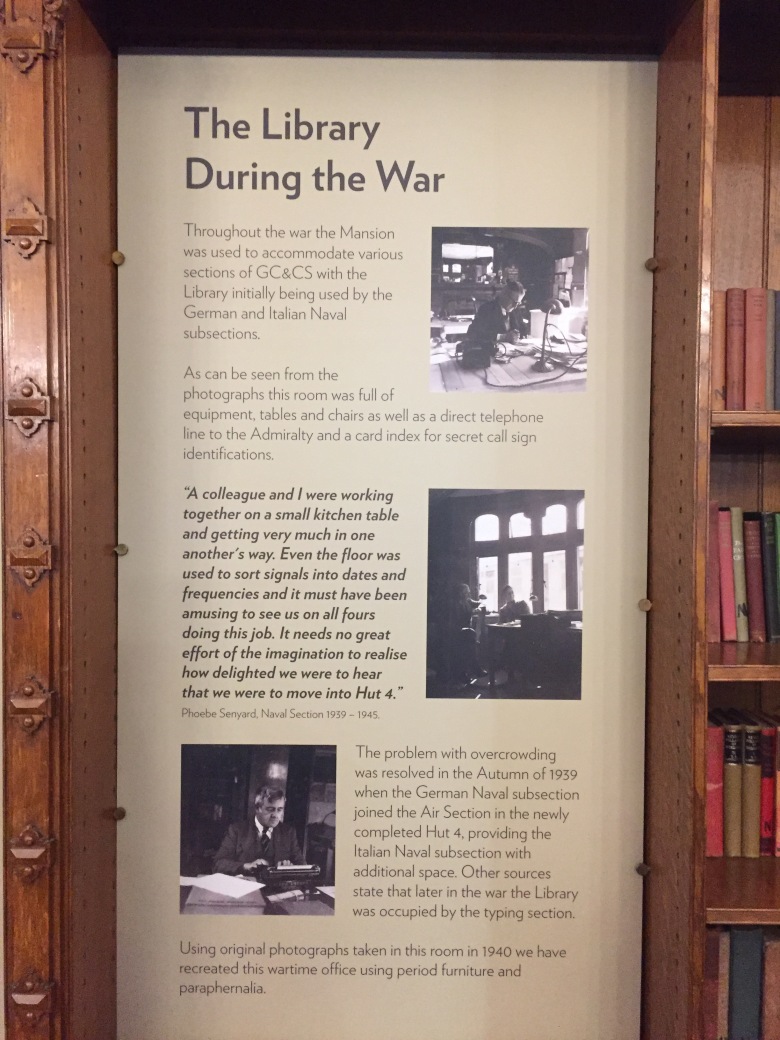 Thats about it from our visit to Bletchley park, check out all the pictures in the gallery.

Just before we left we felt hungry so we decided to find somewhere to eat, and oh boy did we, its about 10 minutes away, food is great and priced well, check out the pictures below 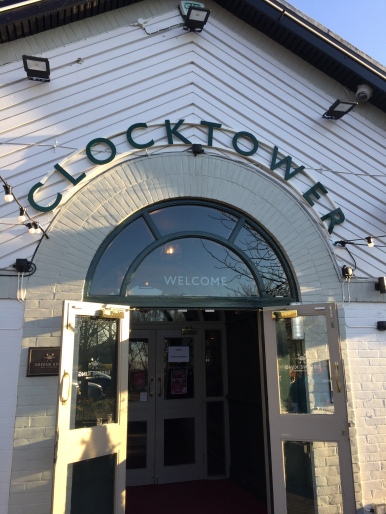 thats beef in yorkshire pudding wrap, its bloody great I can tell you £4.99